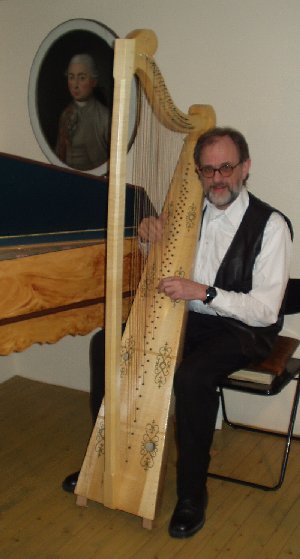 
What is a baroque harp?

Harps of different shapes and sizes have been played at least from the Middle Ages and onwards. The early harps were not big, and they had a single row of strings with the diatonic notes ("the white keys of the piano"). If half-tones were needed, one or more strings could be retuned, or there were other ways of getting around the problems. But this lack of chromatics, the lack of half-notes, was more and more felt, and several experiments were made to add strings with the half-notes ("the black keys of the piano"). Towards the end of the 16th century the double harp, with two rows of strings, became more common. In the 17th century the triple harp, with three rows of strings, seems to have been more common, at least in Italy. In Spain chromatic harps with two crossing rows of strings were played. But although these multi-row harps solved the problem of chromatics, they were regarded as difficult to play. Therefore the simpler one row harps lived on, parallell with the multi-row ones, and when mechanical solutions were invented to change the pitch of the strings (first hooks, later pedals), the double and triple harps lost ground and disappeard in the 18th century. Only in Wales the triple harp survived as a folk instrument.

In Italy large multi-row baroque harps were called Arpa doppia, "double harp", a term which like "double bass" said more about the size than about number of string rows.

Baroque harps differ from modern harps not only in number of strings, but also very much in sound. The gut strings hare a much lower tension than what is normal on modern harps. This, in addition to constructional details, gives the baroque harps a sound that may remind the listener more of a lute than a modern harp.

I built my triple harp from a kit by Tim Hobrough. It is his model "Trabaci", a medium sized triple harp in Neapolitan style.

For different reasons there was written very little music specific for the harp during the baroque. But the harp was often used as a continuo instrument, often together with other bass and chordal instruments. The bass line was the foundation, and over this the continuo musician improvises chords and ornaments in harmony with the melody part and figuring. This gives the continuo player a freedom comparable to the freedom of a folk or jazz musician in our days. And Marin Mersenne, who published a book on music in the 17th century, wrote that harpists played from the same repertoire as lute and harpsichord players. Other sources indicate the same. Therefore a baroque harpist today may pick and chose from the rich repertoire of lute and harpsichord music.

These magnificent instruments were rediscovered and revived rather recently. Therefore the number of good musicians still is comparatively small. Among the best performers on double harp today are Andrew Lawrence-King and Frances Kelly. Other fine performers are Astrid Nielsch, Mara Galassi, Christina Pluhar and Hannelore Devaere, just to mention a few of them.

There are not so many builders of baroque harps. We may mention Tim Hobrough, Simon Capp, Claus Hüttel, Eric Kleinmann and Thurau Harps.
More informations can be found at the site of the International Historical Harp Society.

You can see some additional photos of harps and harpists in the Harp gallery.

Medieval harps were mostly rather small. They existed in a variety of shapes, which differed according to time and place. Irish and Scottish harps - also called Clarsach - had a robust shape and were strung with wire strings. This gives these Clarsachs a bell-like sound which is quite different from "normal" harp sound.

These harps are rather modern creations, and they combine features from the traditional Irish and Scottish harps and modern concert harps. They come in many sizes and shapes. These harps have become quite popular, and there are lots of very good performers who play them.